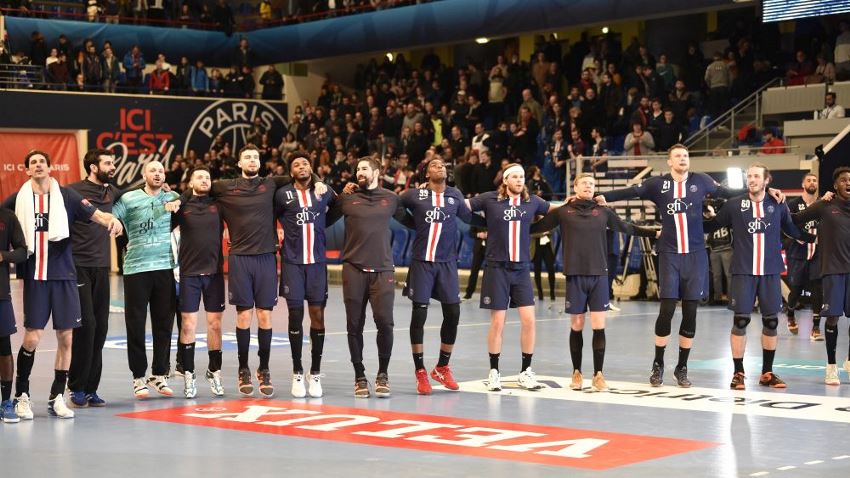 Aalborg finish fourth in Group A while Paris eliminate Zagreb

Two of the four teams on the court this afternoon still had something to play. Aalborg were chasing the fourth row in the standings, which they would get with a win against an already-eliminated Elverum.

In the other game, if Paris had secured their second spot before the game thanks to Szeged’s loss in Barcelona yesterday, Zagreb still had a chance to qualify for the Last 16. But in order to do so, they had to take the two points against PSG.

Despite being already out of the competition before this game, Elverum did give Aalborg a hard time. Maybe not in the first moments of the game, as the Danish side broke away on the scoreboard quickly.

Four goals ahead after eight minutes, six after 22 minutes and seven at half-time (18:11), the Danish side’s offence was roaring as Mark Malcher and Sebastian Barthold were scoring goal after goal.

With the will to get out of the competition showing their best face, Elverum came out of the locker room with better intentions on both sides of the court. With Sigvaldi Gudjsonsson and Lukas Sandell in the driving seat, scoring respectively six and seven, the visitors came back within one with two minutes to play.

And Henrik Møllgaard’s experience did the job and, scoring the winning goal with 50 seconds left to play, Aalborg’s left-back gave his team the two points (30:28) and the group’s fourth place.

After the game, Møllgaard said: "It was two different halves. In the first half we played really well, but in the second half Elverum made it hard for us, and we made a lot of mistakes, and we could not find our rhythm. However I am really pleased with the outcome. We got the two points which was our goal to secure the fourth place in the group."

Zagreb’s resistance against Paris lasted exactly 13 minutes. Playing seven against six, the Croatian side easily found solutions offensively at the start of the game, but that did not last long.

Not conceding a goal in four minutes, Paris broke away on the scoreboard, scoring four in a row thanks to wingers Benoit Kounkoud and Adama Keita, and the game was decided.

With an impressive Sander Sagosen at the helm, scoring eight in the whole game, the hosts were five ahead at the break, 17:12, after being seven ahead a couple of minutes before.

The rest of the game felt like a walk in the park for Paris. No matter how many goals Milos Bozovic scored, the French was too confident in its own game. With Vincent Gérard on fire between the posts (14 saves), it was almost impossible for Zagreb to come back.

The maximum gap between the two teams was on the final siren, after Dylan Nahi scored one last fastbreak, to give his team a clear victory (37:26).

Paris coach Raul Gonzalez said: "We had some problems early in the game tonight against Zagreb's seven against six. But we changed our defence and it was much better afterwards. We are happy we managed to finish second of the group as it was not easy. Of course, we would have liked the first place but Barça were the best team overall. I don't know much about Dinamo, but to be able to win both games against Sporting, you must have some quality. For us, the last 16 phase is just a second start in the competition."