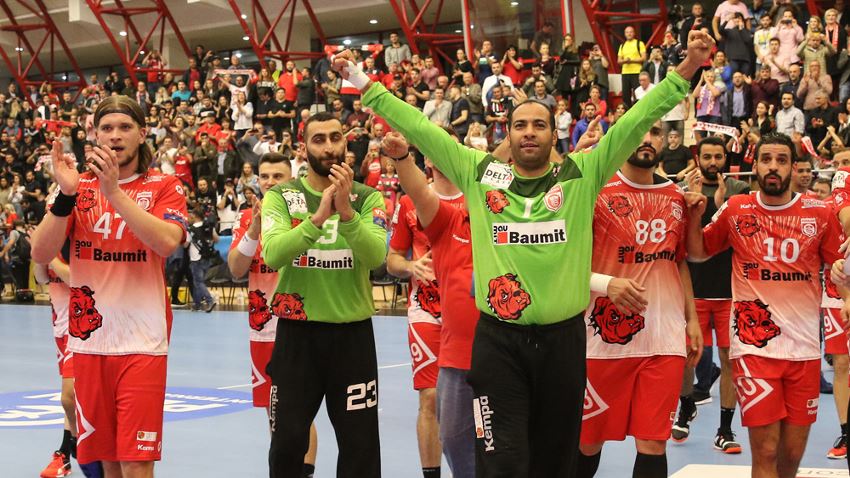 Romanian champions C.S. Dinamo Bucuresti are almost ready for the VELUX EHF Champions League knockout matches groups C/D stage after a 27:26 home win against Kadetten Schaffhausen. Dinamo had to work hard with the win not secured until the last 120 seconds and they can possibly celbrate the ticket to the next phase before round 7 is over.

Still missing their usually high-scoring right back Amine Bannour, Dinamo were tested against their extremely-competitive Swiss visitors but managed to win in the end to secure at least second place in group D and, with it, a ticket to the elimination matches to be held in early 2020.

Although Schaffhausen got away on a fast-break every now and then in the opening stages, Dinamo were in control early on, leading by three or four goals most of the time with their vociferous home fans cheering on their team constantly.

However, as the game approached the break, Schaffhausen managed to catch up even with their Hungarian playmaker Gabor Csaszar not as dominating as he was against GOG last Thursday, where he scored 16 goals.

Still, he added enough speed and creativity to the Swiss attacking play to enable them to reduce the distance to just one goal (15:14) at the break.

The lead changed hands a number of times in the second period – at one stage Schaffhausen even took a two-goal lead – but the home side, inspired by the heroics of their Tunisian and Iranian goalkeepers, Missaoui Makrem and Saeid Heidarirad, were able to keep in check with Schaffhausen and they finally decided the match with just over one minute remaining when left back, and top-scorer, Ante Kuduz put his side two ahead (27:25).

At the final buzzer there were jubilant scenes both on and off court for the home side and their supporters as, with three matches still remaining to be played in group D, they could start looking at who they might face from group C in February or March 2020 in the two-legged elimination tie.

“It was a very tough match, but I am proud of my players for what they have shown,” said Kadetten coach Petr Hrachovec. We lost in defence and made mistakes in crucial moments.”

His opposite number, Constantin Stefan, put the win down to his players just doing their job. ”It was a hardworking victory,” said the Dinamo Bucuresti coach. “We analysed their last two games in the group, and we saw that they have grown up very much. We had some key injuries, but we managed to have a good seven [on court], especially Ante Kuduz, who had a big day.”