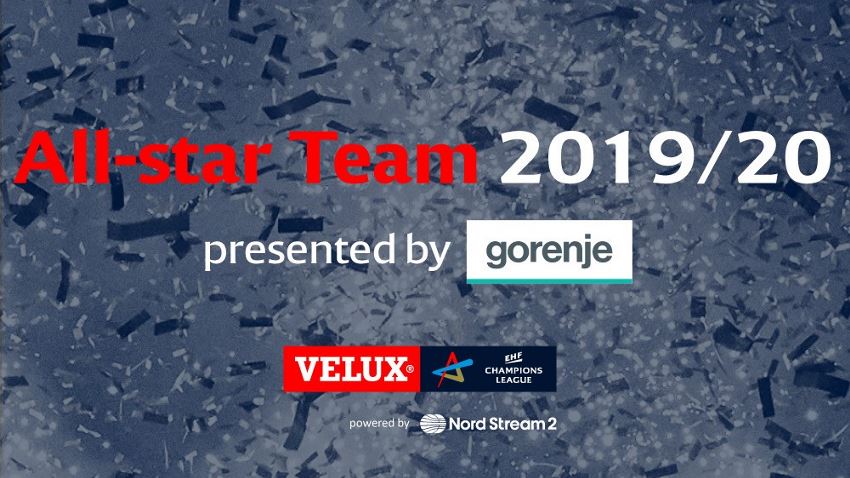 Handball fans all over the world have given the VELUX EHF Champions League All-star Team an almost completely new look for the 2019/20 season.

Compared to last year, only two names are returning to the annual selection of 10 standout performers in Europe’s premium club competition: PSG’s Mikkel Hansen as the centre back and Veszprém’s Blaz Blagotinsek as the best defender.

Over the past two weeks around 34,000 fans have used the opportunity to pick their favourite players and coach as the total votes casted in all 10 categories were a staggering 335,934.

The selection of 50 nominees for the VELUX EHF Champions League All-star Team vote presented by Gorenje was released two weeks ago, with one name in each category determined by coaches from this season’s participating clubs. Ultimately, four of the coaches’ choices in the nominations have made it to the final line-up.

The vote took place in unusual circumstances in comparison with other years, with the season’s knockout matches in the Last 16 and the quarter-final canceled amid the COVID-19 pandemic, and the VELUX EHF FINAL4 2020 in Cologne rescheduled for 28-29 December with Barça, THW Kiel, Paris Saint-Germain Handball and Telekom Veszprém HC fighting for the title.

Still, the vote went along to reward players for their efforts over the season and give fans the chance to show their support.

Eight new names are appearing on the All-star Team

With Hansen and Blagotinsek the only returnees, eight new names are appearing on the VELUX EHF Champions League All-star Team 2019/20.

PSG have a second player in the line-up, as left back Sander Sagosen was also picked by the fans.

Kiel, which made an impressive return to the competition following their triumphant 2018/19 season in the EHF Cup, are also represented by two players: goalkeeper Niklas Landin and right wing Niclas Ekberg.

Veszprém, however, lead the way with three awardees in total: Blagotinsek’s teammate Manuel Strlek won the vote for the All-star left wing, while David Davis has been chosen as the best coach.

Three more clubs are all represented once: MOL-Pick Szeged with Bence Banhidi as the line player, PGE VIVE Kielce with Alex Dujshebaev as the right back, and Barça with Aleix Gomez as the best young player.

While some awardees, including Landin, Strlek, Sagosen, Banhidi, Ekberg and Blagotinsek, were all clear winners in their respective category, others finished only just ahead of their challengers.

Davis got only 4% more of the votes for best coach than Kiel’s Filip Jicha; Dujshebaev defeated both C.S. Dinamo Bucuresti’s Amine Bannour and Szeged’s Jorge Maqueda by just 2.3% for the right back spot; and Hansen edged Kiel centre back Domagoj Duvnjak by only 2.2%.

However, the closest race of all was for the best young player award, where Gomez received a mere 0.5% more of the votes in that category than the runner-up, FC Porto Sofarma’s Andre Gomes. 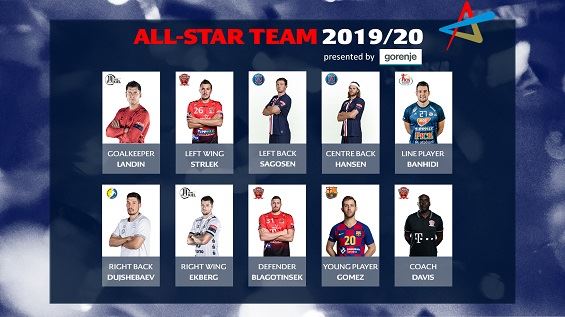