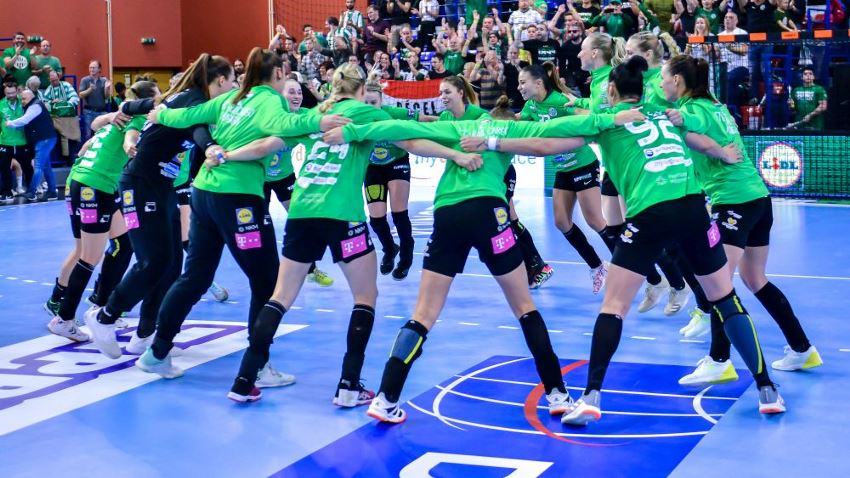 All quarter-finalists in group 1 had been named, but the teams had something to fight for as their final places in the group are yet to be determined.

Following a hard-fought 28:26 win against CSM Bucuresti, Metz Handball are top of the group, two points ahead of Team Esbjerg who suffered a 26:25 defeat at FTC-Rail Cargo Hungaria.

CSM had booked their quarter-final ticket on Saturday without actually playing – Rostov’s win at Vipers meant that the Romanian team are through to the next round.

At Metz, Bucuresti were eager to extend their three-match winning run and enjoyed a better start to lead 2:1 and 3:2. Yet Metz, who were vocally supported by home crowd, soon grabbed the initiative.

Solid defence allowed the French team to lead 9:5 by the 15th minute, and although CSM managed to reduce the gap, it was Metz who went to the dressing room with a one-goal advantage, 14:13.

The French side managed to hold back Cristina Neagu, who scored just four goals from 11 attempts. Metz’s leaders Grace Zaadi, Laura Flippes and Jurswailly Luciano were more efficient, and combines with Ivana Kapitanovic’s saves, it helped the visitors to pull clear again after the break.

WATCH: Two saves in just under a minute from Ivana Kapitanovic proved to be crucial for @MetzHandball in their narrow victory over @csm_bucharest in Group 1! 💥 #deloehfcl pic.twitter.com/ysYC1qXS7u

By the 53th minute, they led by six goals (26:20) but made many mistakes late in the game, allowing CSM to cut the deficit to 27:26. However, Astride N’Gouane’s goal five seconds from the buzzer sealed Metz’s victory.

Esbjerg had boasted a six-game unbeaten run in the competition, but that streak came to an end in Hungary, where FTC-Rail Cargo Hungaria proved to be too strong for the Danish side.

FTC had lost a chance to go through, yet Gabor Elek’s team were determined to make their fans happy in the last home match of the European season.

Katrin Klujber was a driving force of the home side, and her goals helped FTC to take an early control of the match and lead 3:1.

However, it did not take long for Esbjerg to hit back. As usual, Estavana Polman played a key role in the team’s attack, and her goals helped the visitors to lead 15:13 at the break.

Yet early in the second half, another string of Klujber’s goals inspired FTC to a successful 6:2 run to put them ahead 20:19.

The last 20 minutes of the match saw a repeating scenario where the Hungarian side took a one-goal lead, but Esbjerg drew level time after time.

Yet after Klujber made the score 26:25 three and a half minutes from full-time, the Danish team could not score in return, as their several shots were stopped by the brilliant Blanka Biro.

FTC coach Gábor Elek said: "It was an important win for our fans, our souls and our faith. We had also luck in this win, but it was important, that the really creative Esbjerg could not score as many goals as they wanted in the second half. I think, the fight that our players showed was one of the best in this season."