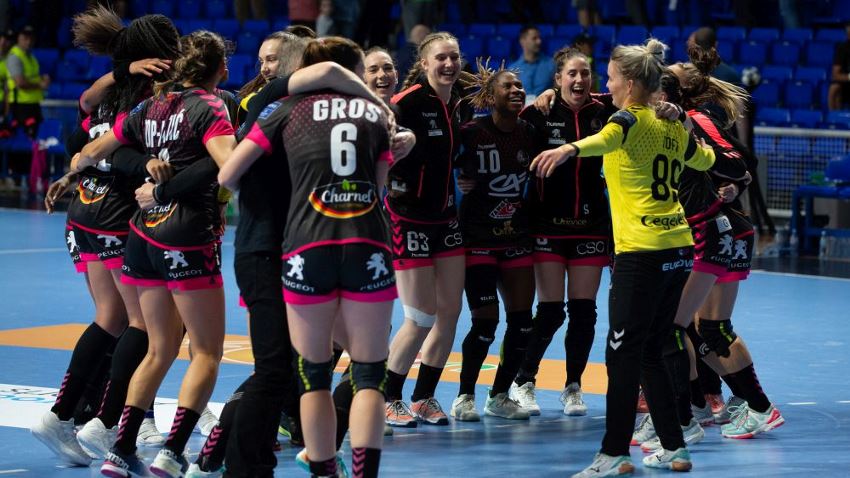 Brest Bretagne Handball caused the first sensation in this season's DELO WOMEN'S EHF Champions League. The French side scored 19 goals in the second half against Buducnost to secure a surprising 35:32 away win.

Buducnost built their succesful seasons and pride themselves on their superb defence, yet it was the defence that failed first in the second half against Brest in their opening Champions League game of the season.

Having back Jovanka Radicevic and Majda Mehmedovic looked a little like Buducnost might bring back the gang and the fighting spirit that brought them the trophy a few years back, but there were normal growing pains for a team that failed to earn a DELO WOMEN’S EHF FINAL 4 berth in the past two seasons.

A lively start from Ana Gros saw Brest take an early lead, but Buducnost rode a 4:1 run, which was spurred by Majda Mehmedovic, to take back the lead.

As Brest got back into their senses, Buducnost continued to pound in attack, keeping their opponents at bay, but the French side never managed to tie the game before half-time. However, due to Buducnost’s failure to use their defensive nous, the game was still on a knife’s edge, 17:16, after 30 minutes.

With Brest missing three key pieces in their cog, it looked like the French side were done and dusted, yet a swift ressurgence on their part saw them tie the game, 23:23, with Monika Kobylinska in superb shooting form.

Buducnost's nerves got to them, their attack plummeted and – thanks to superb outings from Ana Gros and Pauline Coatanea – they finally had to concede the game. Gros and Coatanea seven goals each, helping Brest take a 35:32 win.

Milena Raicevic was disappointed by her side's defensive play in the loss. I'm disappointed, especially in defense. If there is a segment that has failed us, then it is defence. We didn't play defence as we wanted from the beginning and it cost us," said the Buducnost centre back.

Brest's head coach, Laurent Bezeau, was naturally happy after his team's win. "I'm happy after great victory. We won against a great team that has a great coach and players. From the beginning, we knew we could win, we prepared well and we had a lot of confidence. We had a great desire to come to victory and we achieved it," said Bezeau.