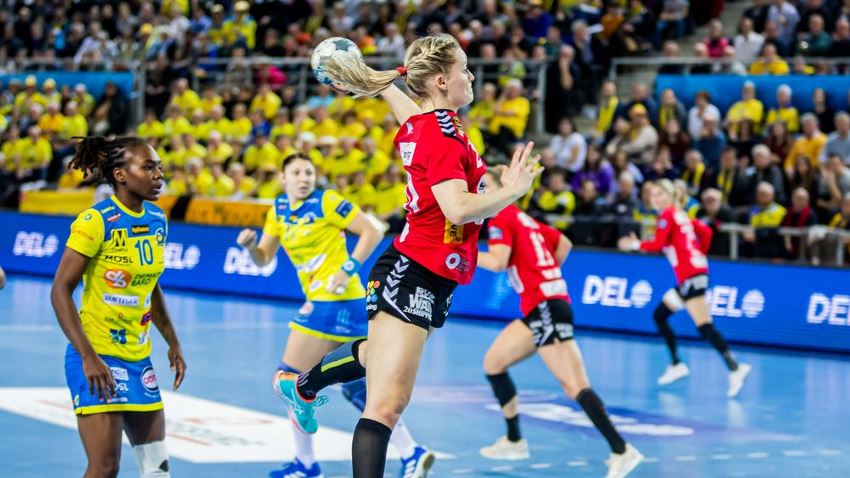 In their final main round match of the DELO WOMEN'S EHF Champions League, Esbjerg needed a six-goal win to finish top of group 1 and any kind of win to finish second.

In the end, the Danish side snatched a 30:29 victory, while Metz stayed top of the group despite the narrow defeat.

· Metz, Esbjerg and Rostov all have 13 points but finished the group in that order on head-to-head results
· Metz will meet Ramnicu Valcea in the quarter-final, while Esbjerg are to face Buducnost
· Marit Jacobsen was Esbjerg’s top scorer with 11 goals
· Louise Burgaard, Olga Perederiy and Astride N’Gouan scored four times apiece for Metz

Late in the game, both sides had a chance to grab two points. But Metz lost a ball in their last attack before Estavana Polman gave Esbjerg the win just four seconds from full-time.

While Polman finished the match with five goals, another Esbjerg's heroine of the day was Marit Jacobsen, who converted all 11 of her attempts.

In the opening minutes, the home team's win looked unlikely as they looked nervous and lost many balls, which resulted in Metz's early 5:0 lead.

Yet when Jacobsen scored Esbjerg's first goal almost seven minutes into the game, the Danish side gained confidence and reduced the gap to 6:5.

Metz were back on track with another good spell, although marred by Orlane Kanor's injury. Free-flowing attack and several saves by Ivana Kapitanovic powered them to a five-goal lead at the break, 19:14.

However, Metz's shot efficiency, which was 70 per cent in the first half, significantly dropped after the break as Esbjerg's defence found a way to stop their rivals.

As a result, the hosts started to catch up and drew level with ten minutes to go at 25:25 and they went on to snatch a win thanks to two goals in the final 70 seconds.

Estavana Polman scores the winning goal in the final seconds for @TeamEsbjerg, completing a remarkable second half comeback and securing 2nd place in #deloehfcl group 1! 💥 pic.twitter.com/2p01WiXOdA