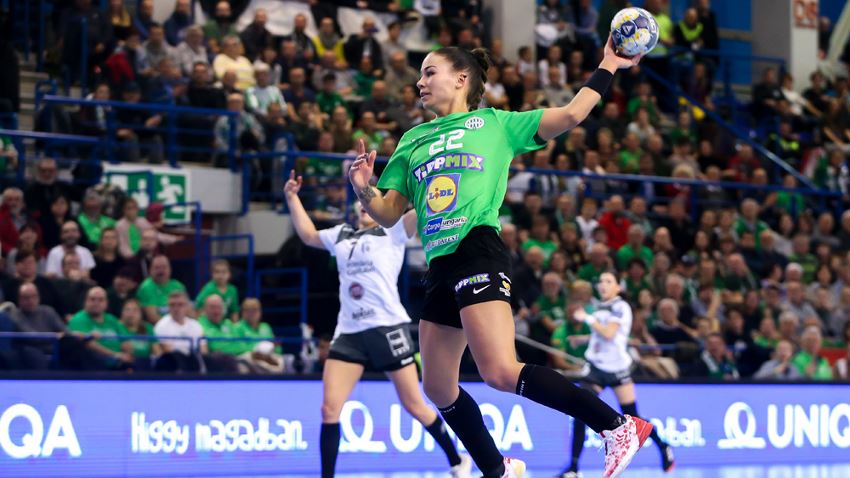 FTC leave no chance for CSM in Match of the Week

FTC-Rail Cargo Hungaria had started the DELO WOMEN’S EHF Champions League Main Round with just one point yet staying in bottom spot is clearly not part of their plans as the Hungarian side made their fans happy, beating last season’s quarter-finalists, CSM Bucuresti, clearly by 10 goals, 33:23.

Despite starting the main round in a lowly fifth-placed position in group 1, CSM Bucuresti boasted the best defensive record of all teams in the competition, having not conceded more than 25 goals in any one of their previous six group matches.

However, the Romanian side failed to live up to that standard in Erd, Hungary, where home side FTC scored 19 goals in only the first half and added a further 14 more after the break.

FTC’s free-flowing attack caused huge problems for the visitors straight from the opening minutes, with Katrin Gitta Klujber, Noemi Hafra and Nadine Schatzl all having a great impact.

On the other side, the visitors did not look like their usual selves as World Handball Player of the Year Cristina Neagu missed a number of early chances meaning that FTC led 9:2 by the 13th minute.

Later on, CSM stabilised the game to some extent, yet the 19:10 score at the break was hardly cause for optimism.

There were no signs of a possible Bucuresti resurgence in the second half, as the visitors clearly struggled against FTC’s defence and Blanka Biro in goal, who stood like a wall.

'Hello @csm_bucharest. My name is Blanka Bíró and I will be mainly keeping your shots out of my goal for @Fradi_HU today.' #MOTW #FTCBUC #deloehfcl pic.twitter.com/WO55rX6zP8

With 10 minutes to go, the Hungarian outfit led by 12 goals, 29:17 and although Neagu improved her efficiency and finished the game with seven goals, it was FTC who went on to celebrate a clear victory and improve their position in the table.

“After a long time without we saw our best form,” said FTC coach Gabor Elek. “I didn’t dare to even dream about a result like this – the girls put in an amazing performance and Blanka was outstanding.

Well, it was #MOTW so why not see this combination from Viktoria Lukacs to Aniko Kovacsics for @Fradi_HU against @csm_bucharest?

“Our attacks were creative, the players stayed disciplined and we played clever in the second half. This afternoon everything succeeded from our point of view and I also must highlight the atmosphere in the arena and our fans, which made this match an amazing experience.”

His opposite number, Adrian Vasile, who is also the assistant coach for the Montenegrin women’s national team, had to concede that it was just a bad day at the office for him and his team. “We made this game hard for ourselves,” he said. “We made mistakes and after bleeding we were not able to recover- it was impossible to come back.

“FTC put in a top performance today and Blanka Biro was exceptional, but all in all, FTC deserved this win, so I would like to congratulate them.”